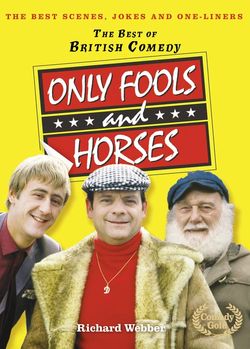 The best jokes, gags and scenes from a true British comedy classic.

Del: You were gun running during the Spanish Civil War?
Grandad: Well…that was the best time to do it!

‘A man like you needs something to reflect your image – I’ve got a lovely Skoda in the forecourt.’
Boycie (…trying to sell a used car to Del)

In the history of British comedy classics, there is no better example than the hugely popular and critically-acclaimed Only Fools and Horses. Set in Peckham, inner London, it chronicles the adventures and exploits of ambitious market trader Derek ‘Del Boy’ Trotter, his gormless younger brother Rodney, and a host of other unusual misfit characters, in their attempts to get rich selling anything and everything to anyone who’ll buy it.

Between 1981 and 1991 seven series of the show were broadcast in the UK, with sporadic Christmas specials until 2003. Even now it remains the most-watched British sitcom of all time, holding the record for the highest UK audience for a sitcom episode for the 1996 special ‘Time On Our Hands’.

The Best of British Comedy – Only Fools and Horses includes:

• The History: an overview of how Only Fools and Horses was born and developed
• Gags and Catchphrases: a collection of classic quotes
• Did You Know?: snippets of info about the show, cast, etc.
• Favourite scenes: the most memorable scenes in full
• An OFAH quiz

‘I’m depressed because of the state of my life at the moment. I’ve got this ‘orrible feeling that if there is such a thing as reincarnation, knowing my luck, I’ll come back as me!’
Rodney

‘I heard a rumour that Mickey Mouse wears a Rodney Trotter wristwatch.’
Boycie

Richard Webber writes regulary about TV in his job as a journalist and writer. He contributes to a host of newspapers and magazines, including TV Quick, Daily Express, Sunday Express and the Sunday Telegraph and is the author of over a dozen books celebrating classic comedy.