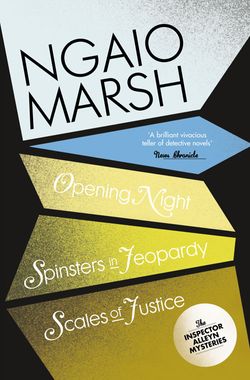 Commemorating 75 years since the Empress of Crime’s first book, the sixth volume in a set of omnibus editions presenting the complete run of 32 Inspector Alleyn mysteries.

OPENING NIGHT
Dreams of stardom lured Martyn Tarne from faraway New Zealand to a soul-destroying round of West End agents and managers in search of work. Now, driven by sheer necessity, she accepts the humble job of dresser to the Vulcan Theatre’s leading lady. But the eagerly awaited opening night brings a strange turn of the wheel of fortune – and sudden unforeseen death…

SPINSTERS IN JEOPARDY
High in the mountains stands an historic Saracen fortress, home of the mysterious Mr Oberon, leader of a coven of witches. Roderick Alleyn, on holiday with his family, suspects that a huge drugs ring operates from within the castle. When someone else stumbles upon the secret, Mr Oberon decides his strange rituals require a human sacrifice…

SCALES OF JUSTICE
The inhabitants of Swevenings are stirred only by a fierce competition to catch a monster trout known to dwell in their beautiful stream. Then one of their small community is found brutally murdered; beside him is the freshly killed trout. Chief Detective Inspector Roderick Alleyn’s murder investigation seems to be much more interested in the fish…