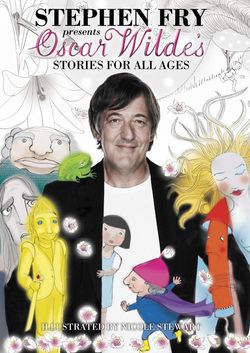 Selected and presented by one of Wilde’s biggest fans, the book includes a foreword from Stephen Fry, as well as introductions to the stories themselves, explaining why they mean so much to him and why they should mean a lot to you too. llustrated by Nicole Stewart, stunning artwork accompanies each story to give shape to the reader’s imagination.

Whether you know it or not, the stories in this book are familiar. Like old friends whose charm and warmth never fade, Oscar Wilde’s short stories have enchanted generations of readers, and this beautiful book makes them accessible to an entirely new readership.

Selected and presented by one of Wilde’s biggest fans, the book includes a foreword from Stephen Fry, who will also supply short introductions to the stories themselves, explaining why they mean so much to him and why they should mean a lot to you too.

Meet the selfish giant, whose garden was cloaked in perpetual winter until he allowed the children to enter and play, the happy prince whose statue stood overlooking his city, who gave the rubies and sapphires embedded in his eyes and clothing to feed the poor, and the tiny swallow who helped him. And let’s not forget the remarkable rocket who was so convinced that he would be the brightest, most remarkable rocket of all, yet who ended up in a ditch. There’s also the Canterville ghost, so inept at being scary that every attempt to spook his American visitors results in failure.

Stephen Fry has always been passionate about Oscar Wilde’s writing but he has a particular fondness for his short stories. In this beautifully illustrated book he shares with us what each story means to him and what he feels the reader can take away with them, whether they’re five or fifty years old. As well as a general introduction, Stephen offers introductions to the stories themselves, taking the reader through his selection. Illustrated by Nicole Stewart, stunning artwork accompanies each story to give shape to the reader’s imagination.

Whether you are buying this for yourself, for your wife, your son or daughter, for your nephew, your niece, your mother, your brother or your sister, the book will be a gift that you or they will cherish forever and return to time and time again. These are stories for adults and children of all ages, for all time.

Comic genius and Renaissance man, Stephen Fry is writer, actor, comedian, broadcaster, director, librettist and compere extraordinaire. He was voted among the all time top 50 comedians by fellow comedians and ranked 6th in the BBC’s Top Living Icon awards. He is best known for his TV comedy, including A Bit of Fry and Laurie, Jeeves and Wooster, Blackadder and QI, as well as ITV’s recent popular drama, Kingdom. His acting/directing film credits include playing his hero, Oscar Wilde in the film Wilde, as well as Bright Young Things and Gosford Park. He is the distinctive voice behind the Harry Potter series of audiobooks and found recent futher acclaim for his TV documentary, ‘The Secret Life of the Manic Depressive’.