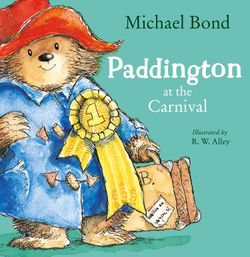 A funny picture book about Paddington, the beloved, classic bear from darkest Peru – soon to be a major movie star!

Paddington has never been to a carnival before, so Mr Gruber takes him down to the canal to join in the fun. Hoping to win a boat ride for two, the friends enter the Busy Bee Adventure Trail. Paddington soon discovers that he’s very good at spotting things beginning with the letter B, but it seems that he’s not the only one with his eye on the prize…