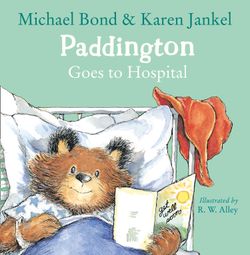 “We should never have given Paddington a boomerang for his birthday,” said Mrs Brown as she gazed down at the figure lying on the lawn. “I knew no good would come of it.”

Paddington let out a groan …

When the Browns find Paddington lying on the lawn, unable to remember where he is or even what the word “bun” means, they immediately realise something is seriously wrong and send for an ambulance. It’s Paddington’s first time in hospital and the doctors and nurses soon discover that he is rather an unusual patient!

Full of the humorous misunderstandings and adventures that this lovable bear is famous for, this is a great story for the young Paddington fan who is apprehensive, or merely curious, about what goes on inside a hospital.