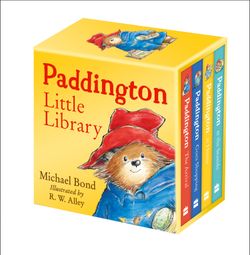 Learn all about the nation’s favourite bear, Paddington – now a major movie star – in these four mini board books packaged together in an attractive slipcase.

Find out how Paddington travelled all the way from Peru to London and met the Brown family, and follow him through a his hilariously action-packed days. These funny stories are perfect for the youngest of Paddington fans to take out and about and enjoy wherever they go.