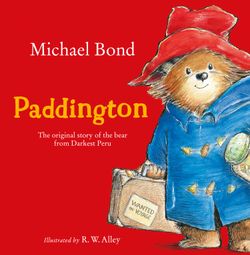 For six decades, stories of Paddington Bear have delighted children all over the world. Paddington is now a major movie star!

For younger readers, here is the classic story of the bear from Darkest Peru who stowed away on a ship headed for England. He arrived at Paddington Station with nothing but a suitcase, a half-empty jar of marmalade and a label that read, ‘Please look after this bear. Thank you.’