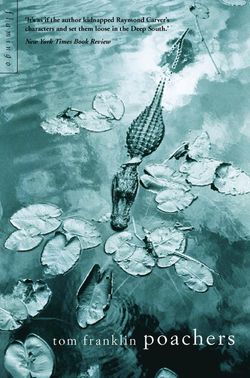 A brilliant debut collection of stories set in the American Deep South, by a distinctive and award-winning new voice.

Poachers reads as if Raymond Carver were still alive and living in the profoundly Deep South. Or imagine a world created by Cormac McCarthy and plunk it down in the woods of southern Alabama, where emotions run as raw as moonshine.

In ten spare, muscular stories, Tom Franklin evokes a world of forests and swamps, hunting and fishing, and fills it with poachers, drunks and poor white trash. He creates haunting tales about people who react, often violently, against a dying world whose gravity they can’t escape, people like the three half-wild brothers in the award-winning title story, who treat the swamp as their kingdom and hunt down anything that crosses their path – until they themselves become the prey.

Tom Franklin was born and raised in south Alabama, where he worked as a heavy-equipment operator in a grit factory, a construction inspector in a chemical plant and a clerk in a hospital morgue. He now teaches fiction writing at the University of South Alabama.Poachers is his first collection. He is now at work on a novel, Hell at the Breech, also to be published by Flamingo.‘Unforgettable . . . Poachers is like a hand that comes out of the green swamp on a moonless night and pulls you from the canoe. What Poachers is really about is discovering a new writer who reminds you that you love to read.’ Tampa Tribune