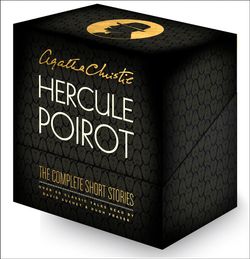 All the Poirot short stories in a single volume

‘My name is Hercule Poirot and I am probably the greatest detective in the world.’

The dapper, moustache-twirling little Belgian with the egg-shaped head, curious mannerisms and inordinate respect for his own ‘little grey cells’ has solved some of the most puzzling crimes of the century. Appearing in Agatha Christie’s very first novel in 1920 and her very last in 1975, Hercule Poirot became the most celebrated detective since Sherlock Holmes, appearing in 33 novels, a play, and 51 short stories.

This collection contains 33 CDs and:
The Adventure of the Christmas Pudding
The Mystery of the Spanish Chest
Four-And-Twenty Blackbirds
The Under Dog
The Dream
Murder in the Mews
The Incredible Theft
Dead Man’s Mirror
Triangle at Rhodes
The Adventures of ‘The Western Star’
The Tragedy of Marsdon Manor
The Adventure of the Cheap Flat
The Mystery of Hunter’s Lodge
The Million Dollar Bond Robbery
The Adventure of the Egyptian Tomb
The Jewel Robbery at the Grand Metropolitan
The Kidnapped Prime Minister
The Disappearance of Mr Davenheim
The Adventure of the Italian Nobleman
The Case of the Missing Will
The Plymouth Express
The Submarine Plan
Problems at Sea
How Does Your Garden Grow?
The Market Basing Mystery
The Affair at the Victory Ball
The King of Clubs
The Lemesurier Inheritance
The Cornish Mystery
The Adventure of the Clapham Cook
Wasps Nest
The Veiled One
The Third-Floor Flat
The Lost Mine
The Adventure of Johnnie Waverley
The Double Clue
Double Sin
The Chocolate Box
The Second Gong
Yellow Iris
The Labours of Hercules, including
•The Nemean Lion
•The Lernean Hydra
•The Arcadian Deer
•The Erymanthian Boar
•The Augean Stables
•The Stymphalean Birds
•The Cretan Bull
•The Horses of Diomedes
•The Girdle of Hyppolita
•The Flock of Geryon
•The Apples of Hesperides
•The Capture of Cerberus

Agatha Christie is known throughout the world as the Queen of Crime. Her books have sold over a billion copies in English with another billion in over 70 foreign languages. She is the most widely published author of all time and in any language, outsold only by the Bible and Shakespeare. She is the author of 80 crime novels and short story collections, 20 plays, and six novels written under the name of Mary Westmacott.