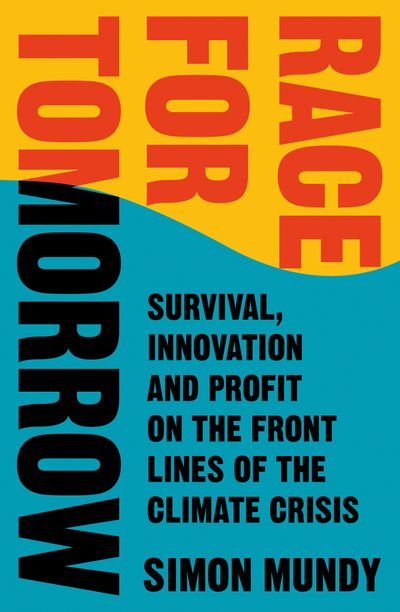 Race for Tomorrow: Survival, Innovation and Profit on the Front Lines of the Climate Crisis

One of the Financial Times’ best books of 2021

In this extraordinary journey through twenty-six countries, Simon Mundy meets the people on the front lines of the climate crisis, showing how the struggle to respond is already reshaping the modern world – shattering communities, shaking up global business, and propelling a groundbreaking wave of cutting-edge innovation.

HOW is China’s green energy push driving a hazardous mining rush in Congo?

WHY is a maverick scientist building a home for engineered mammoths in northeast Siberia?

CAN an Israeli fake meat startup make a fortune while helping to save the Amazon?

WILL Greenland’s melting sea ice put its people at the centre of a global power struggle?

WHO are the entrepreneurs chasing breakthroughs in fusion power, electric cars, and technology to suck carbon from the atmosphere?

As the impacts of climate change cascade across the planet and the global economy, who is battling to survive the worst impacts – and who is chasing the most lucrative rewards?

Telling unforgettable human stories from six continents, this is an account of disaster, of promise, of frantic adaptation and relentless innovation, of hope, of survival, and of the forces that will define our future.

‘I took a great sense of hope’ RICHARD POWERS

‘An inspiring piece of work that deserves a broad audience’ MICHAEL E. MANN

‘Utterly unlike any book yet written in this field’ ANAND MAHINDRA

‘Gripping … A must-read for every concerned global citizen’ NANDAN NILEKANI

Author: Simon Mundy
Format: Trade Paperback
Release Date: 28 Oct 2021
Pages: 416
ISBN: 978-0-00-839430-1
Price: £14.99 (Export Price) , £14.99
Simon Mundy covers environmental and sustainability issues for the Financial Times. He began his reporting career in Johannesburg, where he covered Southern Africa for the FT before a period writing on the London financial sector. He then spent seven years in Asia, heading the FT bureaux in Seoul and Mumbai – before two years travelling across six continents to research Race for Tomorrow, his first book. He was born in the UK.For photo galleries and short films from the journey, visit simonmundy.com

It’s a brilliant book! An optimistic, unpatronising account of what humankind CAN do to address climate change’Rob Rinder, Talk Radio -

‘He takes it down from this 30,000-foot view to people on the ground … I took a great sense of hope’Richard Powers, author of The Overstory -

‘An inspiring piece of work that deserves a broad audience … Read this book both to understand the urgency of climate action, and to recognise, too, the agency we still have’Michael E. Mann, author of The New Climate War -

‘[Puts] a human face on the most important story of our times. This book is eloquent and humane - a vital work of storytelling’Henry Mance, author of How to Love Animals in a Human-Shaped World -

‘Simon Mundy’s vivid and informed despatches from the front line of climate change reveal not only the catastrophes imposed by global warming (which are hidden from most of us) but the best and brightest of responses to them … Don’t wait. Read it now before the race is lost’Adam Nicolson, author of The Sea is Not Made of Water -

‘Mundy’s book reads like a thriller’Mark Lynas, author of Six Degrees and Our Final Warning -

‘Utterly unlike any book yet written in this field. Packed with vivid human stories, from the most desperately challenged communities to the highest levels of global business and politics, it’s an essential guide to how the climate crisis is transforming the modern world’Anand Mahindra -

‘A gripping story of individuals, communities and societies who are grappling with the myriad challenges of climate change. A must read for every concerned global citizen’Nandan Nilekani -