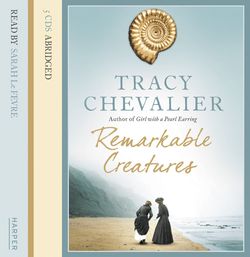 In the year of the 150th anniversary of Origin of Species, set in a town where Jane Austen was a frequent visitor, Tracy Chevalier once again shows her uncanny sense for the topical

In the early nineteenth century, a windswept beach along the English coast brims with fossils for those with the eye…

From the moment she’s struck by lightning as a baby, it is clear Mary Anning is marked for greatness. When she uncovers unknown dinosaur fossils in the cliffs near her home, she sets the scientific world alight, challenging ideas about the world’s creation and stimulating debate over our origins. In an arena dominated by men, however, Mary is soon reduced to a serving role, facing prejudice from the academic community, vicious gossip from neighbours, and the heartbreak of forbidden love. Even nature is a threat, throwing bitter cold, storms, and landslips at her.

Luckily Mary finds an unlikely champion in prickly, intelligent Elizabeth Philpot, a middle-class spinster who is also fossil-obsessed. Their relationship strikes a delicate balance between fierce loyalty and barely suppressed envy. Despite their differences in age and background, Mary and Elizabeth discover that, in struggling for recognition, friendship is their strongest weapon.

Remarkable Creatures is Tracy Chevalier’s stunning new novel of how one woman’s gift transcends class and gender to lead to some of the most important discoveries of the nineteenth century. Above all, it is a revealing portrait of the intricate and resilient nature of female friendship.

Tracy Chevalier grew up in Washington, DC. She moved to England in 1984, and graduated in 1994 from the MA course in creative writing at the University of East Anglia.

Her first novel, The Virgin Blue, was chosen by WH Smith for its Fresh Talent promotion in 1997. In 2000, HarperCollins published Girl with a Pearl Earring, which has gone on to sell over two million copies worldwide. Falling Angels was published to much critical acclaim in 2002, The Lady and the Unicorn, followed in 2004 and Burning Bright in 2007, followed by the bestselling Remarkable Creatures in 2009. Her most recent novel The Last Runaway was chosen as an R&J pick in 2013.

The film of Girl with a Pearl Earring, starring Colin Firth as Vermeer, was released in the UK in 2003. It was nominated for 10 BAFTAs and two Academy Awards.

Tracy Chevalier lives in North London with her husband and son.