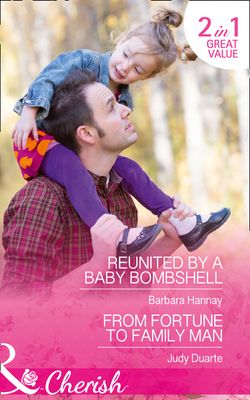 Reunited by a Baby Bombshell
by Barbara Hannay

Prima ballerina Eva Hennessey has made her life in Paris – far away from her childhood sweetheart Griffin Fletcher. But when an invitation arrives for her school reunion, she nervously accepts!

Griff never imagined he would see Eva again, and now he wants some answers! She may be more beautiful than he remembers, but she also masks a pain only he can see. It’s a secret she’s kept far too long… One that will change their worlds forever!

From Fortune to Family Man
by Judy Duarte

Kieran Fortune, vice president of Robinson Tech, knows his strengths. He’s good with technology; he’s good at making money and at making love. But he doesn’t know one thing about parenting. And he’s just become a father. To a toddler.

When the ever-so-sexy millionaire agreed to sign on as legal guardian to his best friend’s daughter, he considered it a mere formality. But now Zach is gone and Kieran is…Dad. In a fit of desperation, he reaches out to Zach’s ex-girlfriend. Dana Trevino is a serious-minded graduate student who is great with little Rosie. She is also Kieran’s polar opposite and the very last woman he should be interested in. It isn’t fair. It isn’t right. It’s also just about inevitable…

Barbara Hannay lives in North Queensland where she and her writer husband have raised four children. Barbara loves life in the north where the dangers of cyclones, crocodiles and sea stingers are offset by a relaxed lifestyle, glorious winters, World Heritage rainforests and the Great Barrier Reef. Besides writing, Barbara enjoys reading, gardening and planning extensions to accommodate her friends and her extended family.