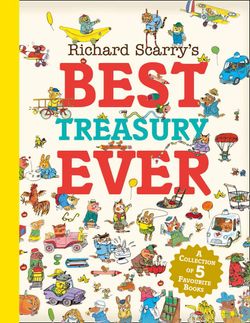 A stunning hardback treasury of five of Richard Scarry’s best-loved stories – the perfect gift for Scarry fans, young and old!

It’s another fun-filled day in Richard Scarry’s Busytown! Pay a visit to Lowly Worm and all your favourite characters in this fabulous collection of Scarry’s best-loved stories. Packed full of cars and trucks, planes and trains, houses, shops and busy streets, it will keep curious minds occupied for hours on end.

Richard Scarry’s fun-filled stories have been delighting children the world over for more than 50 years. This beautiful hardback book is the perfect bedtime companion and a must for Scarry fans aged three and up.

Born in Boston in 1919, Richard Scarry’s drawing talent led him to study at the Boston Museum School. He began his career as an illustrator and freelance artist, and in 1963 he published his first book, RICHARD SCARRY’S BEST WORD BOOK EVER, which became an international bestseller. Scarry has since sold over 300 million books worldwide and been translated into dozens of languages.