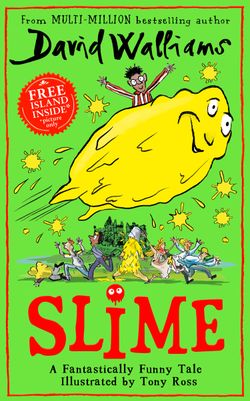 WELCOME TO THE ISLE OF MULCH…

This little island is home to a large number of HORRIBLE grown-ups who like nothing more than making children miserable. The most AWFUL one of all is Aunt Greta Greed who owns the whole island.

Something needs to be done about them. But who could be brave enough?

Meet Ned – an extraordinary boy with a special power. SLIMEPOWER!

David Walliams has revolutionised reading for children and has become one of the most influential children’s writers today. Since the publication of his ground-breaking first novel, The Boy in the Dress (2008), Walliams has seen unprecedented growth with global sales exceeding 45 million copies, and his books translated into 55 languages. Collectively across his titles, David has celebrated 70 weeks (non-consecutive) at number one in the overall book charts and more than 200 weeks (non-consecutive) at number one in the Children’s charts – an achievement no other children’s writer has reached. Born in London, Tony Ross went to art school in Liverpool. His cartoons have appeared in famous publications the world over. His first book, Hugo and the Wicked Winter, was published in 1972. Tony has since written over 100 books and illustrated over 2000!