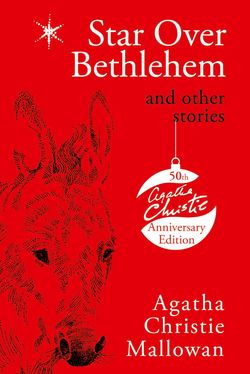 A reproduction in one unique volume of three of Agatha Christie’s rarest and most sought-after books – Star Over Bethlehem, The Road of Dreams and Poems. This 50th Anniversary edition also includes ‘In a Dispensary’, not in print since 1924.

The most popular detective story writer of all time turns her hand to the subject of Christmas.

In a manger in Bethlehem, an angel offers Mary a vision of things to come… and a chance to change it all.

A naughty little donkey learns the meaning of love as he carries a very special mother and child safely to Egypt.

Mrs Hargreaves wanted to like people, but didn’t really know how. Then she reached out to touch a stranger, and her eyes were opened to love.

This special collector’s edition contains a wealth of Agatha Christie rarities – not only all the stories, poems and illustrations from her long out-of-print book Star Over Bethlehem (1965), but also a reproduction of all her rare poetry from the two collections The Road of Dreams (1924) and Poems (1973).

Agatha Christie was born in Torquay in 1890 and became, quite simply, the best-selling novelist in history. Her first novel, The Mysterious Affair at Styles, written towards the end of the First World War, introduced us to Hercule Poirot, who was to become the most popular detective in crime fiction since Sherlock Holmes. She is known throughout the world as the Queen of Crime. Her books have sold over a billion copies in the English language and another billion in 100 foreign languages. She is the author of 80 crime novels and short story collections, 30 plays, and six novels under the name of Mary Westmacott.