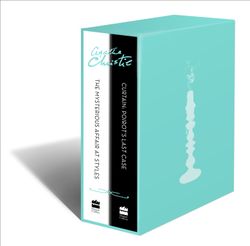 Marking exactly 100 years since Agatha Christie wrote THE MYSTERIOUS AFFAIR AT STYLES, this special edition brings together the first Poirot novel with her last, and includes new cover paintings by Tom Adams, special introductions, and a unique letter from Hercule Poirot himself never before published in the UK.

CURTAIN, written 25 years later but not published until 1976, takes the elderly Belgian detective and his old friend Captain Hastings back to Styles, the rambling country house where they solved their first murder together – and where history seems determined to repeat itself. CURTAIN was the last Poirot novel until Sophie Hannah’s hugely successful continuation novels, THE MONOGRAM MURDERS and CLOSED CASKET.

•A unique pull-out letter written by Agatha Christie in 1936 in which Hercule Poirot introduces himself to his editor, never before published outside the USA

•A newly discovered article by Agatha Christie, Drugs and Detective Stories, written for University College Hospital Magazine in 1941, in which she reminisces about the inspiration for her first book

Agatha Christie is known throughout the world as the Queen of Crime. Her books have sold over a billion copies in English with another billion in over 100 foreign languages. She is the most widely published author of all time and in any language, outsold only by the Bible and Shakespeare. She is the author of 80 crime novels and short story collections, 30 plays, and six novels written under the name of Mary Westmacott.