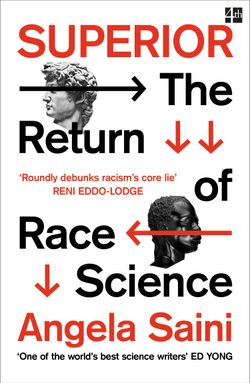 Financial Times Book of the Year

Telegraph Top 50 Books of the Year

Guardian Book of the Year

New Statesman Book of the Year

Where did the idea of race come from, and what does it mean? In an age of identity politics, DNA ancestry testing and the rise of the far-right, a belief in biological differences between populations is experiencing a resurgence. The truth is: race is a social construct. Our problem is we find this hard to believe.

In Superior, award-winning author Angela Saini investigates the concept of race, from its origins to the present day. Engaging with geneticists, anthropologists, historians and social scientists from across the globe, Superior is a rigorous, much needed examination of the insidious and destructive nature of the belief that race is real, and that some groups of people are superior to others.

Angela Saini presents science programmes on BBC Radio 4 and the World Service, and her writing has appeared in the New Scientist, the Guardian, The Sunday Times, Scientific American, Wired and the Economist. Angela has a Masters in Engineering from Oxford University, she is a former Knight Science Journalism Fellow at the Massachusetts Institute of Technology. Her work has won a string of national and international awards. Angela’s first book, Geek Nation, was published by Hodder & Stoughton in 2011, and her second book, Inferior, was the subject of a national crowdfunding campaign which will donate a copy to every state school in the UK.