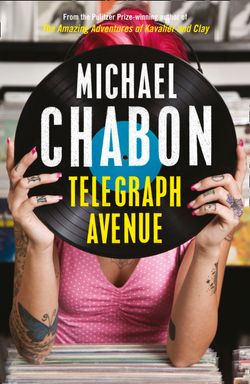 From the bestselling author of ‘The Amazing Adventures of Kavalier and Clay’; his first novel in 5 years is a lovingly painted pop-culture epic.

As summer in Oakland, California, draws to a close, Archy Stallings and Nat Jaffe are hanging in there, co-regents of Brokeland Records. Their wives, Gwen and Aviva, are the Berkeley Birth Partners, a pair of legendary midwives.

When former star quarterback Gibson Goode announces plans to dump his latest Dogpile megastore on Telegraph Avenue, Nat and Archy fear the worst for their vulnerable little enterprise, as behind Goode’s proposal lurks a nefarious scheme. And while their husbands struggle to mount a defence, Aviva and Gwen find themselves caught up in a professional battle that tests their friendship. Then into their already tangled lives comes Titus Joyner, the teenage son Archy has never acknowledged.

An intimate epic that pulses with a virtuosic, pyrotechnical style all of its own, ‘Telegraph Avenue’ is Michael Chabon’s most dazzling book yet, and a must-read for fans of Nick Hornby’s ‘High Fidelity’.

Michael Chabon is the author of two collections of short stories, ‘A Model World’ and ‘Werewolves in their Youth’, the novels ‘The Mysteries of Pittsburgh’, ‘Wonder Boys’, ‘The Amazing Adventures of Kavalier & Clay’, ‘The Yiddish Policemen’s Union’ and ‘Telegraph Avenue’, and the non-fiction books ‘Maps and Legends and Manhood for Amateurs’. ‘Wonder Boys’ has been made into a film starring Michael Douglas and Robert Downey Jr. and ‘The Amazing Adventures of Kavalier & Clay’ won the Pulitzer Prize for Fiction. His short stories have appeared in the New Yorker, GQ, Esquire and Playboy. He lives in Berkeley, California, with his wife and their four children.