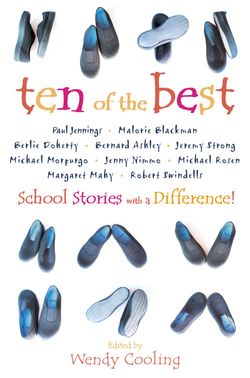 Brand new stories based on each author’s own schooldays – sometimes funny, often poignant, always riveting. Written in each author’s unique style and based on something that is common to every child in the country – SCHOOL. Authors as below:

Stories of running away from school; getting the strap for punishments; vindictive teachers; boys who tell porky-pies; the shy girl who could only talk through her puppet; getting expelled [almost]; being an evacuee; original ways of getting out of being in the school play, as well as meeting one’s own true love at school! Stories that contemporary schoolchildren will relate to in sharing the triumphs and disasters of their favourite authors’ schooldays.

Wendy Cooling is an eminent figure in the Children’s Books World. As a freelance consultant she works with schools, publishers, libraries and the government on the promotion of literacy and love of books. Wendy was a teacher of English in London secondary schools for many years and left to head up the then Children’s Book Foundation where she initiated the Book Start project, which is now run successfully throughout the country. She is an intrepid traveller – camel fairs in India being one of her favourites ,but her home is in Barnet, Herts.