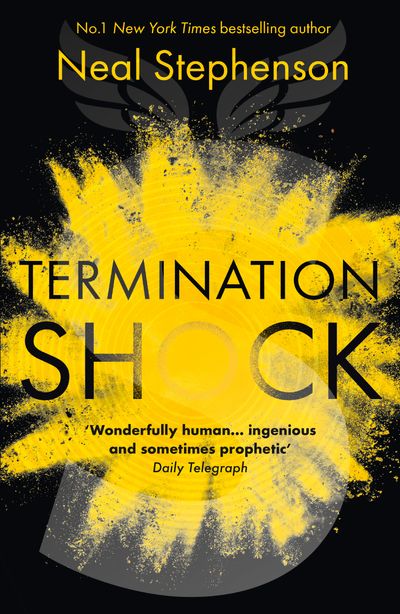 ‘His most visionary, and timely, book yet’ Chicago Review of Books

One man has a Big Idea for reversing global warming, a master plan perhaps best described as “elemental.” But will it work? And just as important, what are the consequences for the planet and all of humanity should it be applied?

As only Stephenson can, Termination Shock sounds a clarion alarm, ponders potential solutions and dire risks, and wraps it all together in an exhilarating, witty, mind-expanding speculative adventure.

Author: Neal Stephenson
Format: Paperback
Release Date: 12 May 2022
Pages: 720
ISBN: 978-0-00-840440-6
Price: £9.99 (Export Price) , £9.99
NEAL STEPHENSON is the author of: Fall or, Dodge in Hell; The Rise and Fall of D.O.D.O. (with Nicole Galland); Seveneves, Reamde, Anathem; the three-volume historical epic The Baroque Cycle (Quicksilver, The Confusion, and The System of the World); Cryptonomicon, The Diamond Age, Snow Crash and Zodiac, and the groundbreaking nonfiction work In the Beginning . . . Was the Command Line.

”'Neal Stephenson has never been afraid of engaging with big ideas within genre forms, and Termination Shock might be his most visionary, and timely, book yet” - Chicago Review of Books