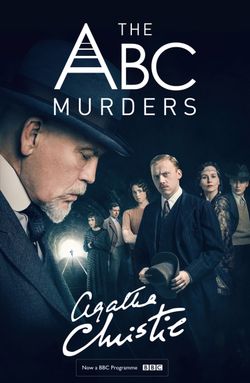 John Malkovich stars as Hercule Poirot in Agatha Christie’s ingenious serial-killer thriller, newly adapted for BBC Television in 2018 by the award-winning team behind And Then There Were None, Witness for the Prosecution and Ordeal by Innocence.

‘Let us see, Mr Clever Poirot, just how clever you can be.’

Murder is a very simple crime. But at the hands of a maniac, a serial killer, it becomes a very complicated business.

The 1930s is a time when the nation is dangerously divided and suspicion and hatred are on the rise. In the midst of this, Poirot faces a serial killer known only as A.B.C. First the killer strikes in Andover, then Bexhill. As the murder count rises, the only clue is the copy of The ABC Railway Guide at each crime scene. Poirot’s investigations are thwarted at every turn by an enemy determined to outsmart him. If Poirot is to match his nemesis then everything about him will be called into question: his authority, his integrity, his past, his identity.

Agatha Christie was born in Torquay in 1890 and became, quite simply, the best-selling novelist in history. Her first novel, The Mysterious Affair at Styles, written towards the end of the First World War, introduced us to Hercule Poirot, who was to become the most popular detective in crime fiction since Sherlock Holmes. She is known throughout the world as the Queen of Crime. Her books have sold over a billion copies in the English language and another billion in over 100 foreign languages. She is the author of 80 crime novels and short story collections, over 20 plays, and six novels under the name of Mary Westmacott.