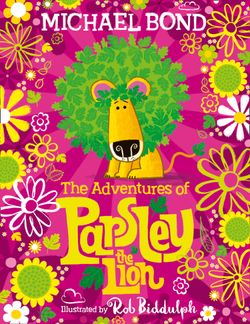 A brand new glorious gift book of a much-loved classic. A celebration of words and pictures from the creator of Paddington Bear, Michael Bond, and contemporary genius and internet drawing sensation Rob Biddulph!

Living in the magical Herb Garden, Parsley the lion is never quite sure what’s going to happen to him next . . . especially with an excitable friend like Dill the dog around.

Parsley made his debut in 1968 in the children’s animated TV series The Herbs, written by the creator of Paddington Bear, Michael Bond. Capturing the hearts of viewers, he went on to star in his own TV series The Adventures of Parsley in 1970, as well as in a series of books and on a wide range of merchandise.

Michael Bond was born in Newbury, Berkshire on 13 January 1926 and educated at Presentation College, Reading. He served in the Royal Air Force and the British Army before working as a cameraman for BBC TV for 19 years. In 2015, Michael was awarded a CBE for his services to children’s literature, to add to the OBE he received in 1997. Michael died in 2017, leaving behind one of the great literary legacies of our time.Rob Biddulph is an award-winning designer, and a full-time author and illustrator. By night he makes up silly stories for his three daughters, and draws pictures to go with them.He lives and works in London, and his first book was the Waterstone’s Children’s Book Prize-winning Blown Away, starring Penguin Blue. Find out more about Rob’s amazing books at www.robbiddulph.com.