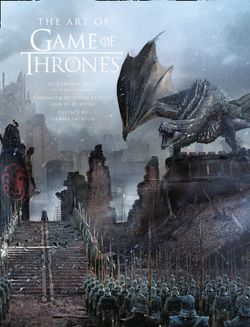 • UNMATCHED DEPTH – 432 pages of concept art, sketches, and production design images covering Game of Thrones seasons 1-8.
• DETAILED REVELATIONS – Comprehensive behind the scenes details covering the design of iconic locations such as King’s Landing, Winterfell, Dragonstone, and Castle Black.
• CONTRIBUTIONS FROM THE CREATORS – Authored by production designer Deborah Riley and including an exclusive foreword from Game of Thrones showrunners David Benioff and D. B. Weiss and preface from Emmy Award-winning production designer Gemma Jackson.
• A PRESTIGE COFFEE TABLE BOOK – Deluxe 9.75 × 13 inch format.
• A SOUGHT-AFTER GIFT FOR FANS – Released in time for the holiday season, this is the perfect Game of Thrones gift for fans and collectors.

Deborah Riley started her design study as an architecture student at Australia’s University of Queensland and went on to complete a stage design degree at the National Institute of Dramatic Art. In 2013 she was hired as the production designer for the fourth season of HBO’s Game of Thrones. Since then she has earned four consecutive Emmy Awards, three Art Directors Guild Awards, and a BAFTA for her work on the show.Jody Revenson has written extensively about the Harry Potter films, with her most recent books being Harry Potter: Spells & Charms: A Movie Scrapbook and Harry Potter: Hogwarts: A Movie Scrapbook. In her first foray into the wizarding world, she edited and contributed to the New York Times bestsellers Harry Potter: Film Wizardry and Harry Potter: Page to Screen.