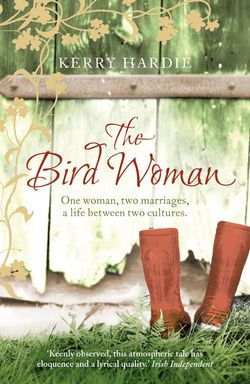 The much anticipated second novel from prize-winning Irish poet and novelist, Kerry Hardie.

‘The Bird Woman’ is a moving account of two marriages, a gift that feels like a curse, and the freedom that lies on the far side of family or group identity.

Ellen McKinnon, red-haired, clairvoyant, fiercely independent, finds her marriage, her health, her sanity threatened when she ‘sees’ the death of a man in a bomb attack before it has really occurred. Terrified by what’s happening to her, she leaves her home, her tribe, her husband, to live with a man she barely knows in Southern Ireland. There she strives to live a normal life in a different culture, to be accepted by her husband’s family and friends, to learn a new way of living. Though determined to suppress her ‘gift’ at any cost, with the birth of her children the clairvoyance changes and broadens into a power to heal. Slowly the rumours spread and the sick seek her out, yet she turns them away from her door.

Her husband and her closest friend demand that she question her right to suppress her remarkable powers. Reluctantly she accepts her fate, and begins her work as a healer. But the personal cost is high, and this work begins to damage her most intimate relationships. When news of the final illness of her long-estranged mother forces her return to her native city, everything falls apart for her and she finds there’s no safe ground beneath her feet.

Kerry Hardie was born in 1951 and went to school in Bangor, Northern Ireland. She has worked for the BBC in Belfast and for the Arts Council of Northern Ireland. She is the author of one previous novel, ‘Hannie Bennet's Winter Marriage’, and four books of poetry, ‘A Furious Place’, ‘Cry for the Hot Belly’, ‘The Sky Didn't Fall’ and ‘The Silence Came Close’. She lives in County Kilkenny with her husband, Sean.