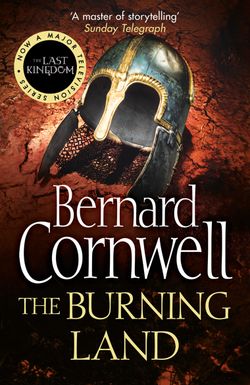 The fifth novel in Bernard Cornwell’s epic and bestselling series on the making of England and the fate of his great hero, Uhtred of Bebbanburg.

BBC2’s major Autumn 2015 TV show THE LAST KINGDOM is based on the first two books in the series.

To King Alfred he is the ‘lord of battles’. He has gained riches, loyal men and a beloved wife. But Uhtred is dogged by betrayal and tragedy.

The ailing Alfred presses Uhtred to swear loyalty to his son and heir Edward, preventing the warrior lord from taking vengeance on those who stole his home at Bebbanburg. Now Uthred will once again defend the Christian kingdom – in a battle which could smash the growing power of the deadly Danes.

In so doing he meets a woman more dangerous than any warlord. A killer, a schemer with a dark power over men’s hearts: Skade.

Uhtred of Bebbanburg’s mind is as sharp as his sword. A thorn in the side of the priests and nobles who shape his fate, this Saxon raised by Vikings is torn between the life he loves and those he has sworn to serve.

Bernard Cornwell was born in London, raised in Essex, and now lives mainly in the USA with his wife. In addition to the hugely successful Sharpe novels, Bernard Cornwell is the author of the Starbuck Chronicles, the Warlord trilogy, the Grail Quest series and the Alfred series.