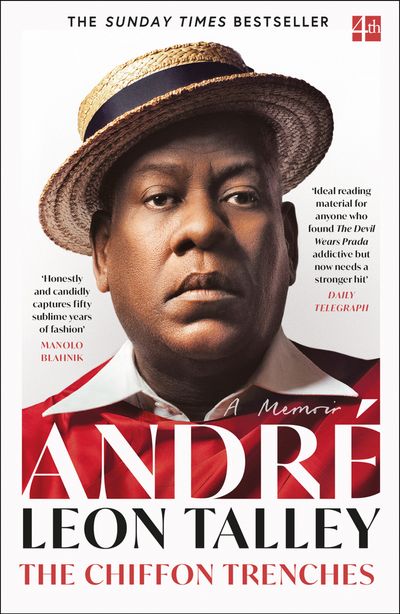 Discover what truly happens behind the scenes in the world of high fashion in this detailed, storied memoir from style icon, bestselling author and former Vogue creative director André Leon Talley.

During André Leon Talley’s first magazine job assisting Andy Warhol at Interview, a fateful meeting with Karl Lagerfeld began a decades-long friendship and propelled Talley into the upper echelons by virtue of his shared knowledge and adoration of fashion. He moved to Paris as bureau chief of John Fairchild’s Women’s Wear Daily, befriending fashion’s most important designers. But as Talley made friends, he also made enemies. A fraught encounter with a member of the house of Yves Saint Laurent sent him back to New York and into the offices of Vogue under Grace Mirabella. There, he developed an unlikely but intimate friendship with Anna Wintour, and as she rose to the top of Vogue’s masthead, Talley became the most influential man in fashion.

The Chiffon Trenches is a candid look at the who’s who of the last fifty years of fashion, and proof that fact is always fascinatingly more devilish than fiction. André Leon Talley’s engaging memoir tells the story of how he not only survived but thrived – despite racism, illicit rumours and all the other challenges of this notoriously cutthroat industry – to become one of the most legendary voices and faces in fashion.

Author: Andre Leon Talley
Format: Paperback
Release Date: 13 May 2021
Pages: 304
ISBN: 978-0-00-834237-1
Price: £9.99 (Export Price) , £9.99, €11.59
One of the most recognizable names and silhouettes in fashion journalism, André Leon Talley was the indomitable creative director at Vogue during the magazine\'s rising dominance as the world\'s fashion bible. Over the past five decades, his byline has also appeared in Vanity Fair, HG, Interview, and Women\'s Wear Daily. He has published several illustrated works, including Little Black Dress, ALT: 365, and Oscar de la Renta: His Legendary World of Style. A documentary of Talley\'s life, The Gospel According to Andre, was released in 2018. Talley received his MA in French studies from Brown, and has been on the board of trustees for the Savannah College of Art and Design for twenty years.

”'What he gives us, ultimately, is a circus the likes of which, given present circumstances, we may never see again. My advice is to do as I did: apply a good squirt of Fracas to your wrists, and sit back and enjoy the lunatic ride” - Observer, Book of the Week

”'Ideal reading material for anyone who found The Devil Wears Prada addictive but now needs a stronger hit. It is brimful of toxic behaviour and noxious values, which makes it perfect consolation, too, for lockdown” - Daily Telegraph

”'A memoir on thriving and surviving the cut-throat fashion industry amid racism and homophobia, The Chiffon Trenches charts Talley’s rise from humble beginnings to becoming one of the most influential men in fashion. From Talley’s first job assisting Andy Warhol at a fashion magazine, to his friendships with the late Karl Lagerfeld and Anna Wintour, The Chiffon Trenches makes for captivating reading for fashion fans and beyond” - Another Magazine

‘Honestly and candidly captures 50 sublime years of fashion. Talley’s unrivalled knowledge, extraordinary eye for spotting raw talent and ‘ahead of the curve’ ability to clearly define what makes a good dress, draws you in from page one. An insightful and intelligent read, conveyed in a way only he could’ Manolo Blahnik -

”'A riveting, enthralling, and heartbreaking read … Andre has lived life at the epicenter of the most glamourous worlds of fashion in both Paris and New York; and now this book is one more chapter in his amazing legacy” - Wendy Goodman, Design Editor, New York Magazine

”'Read this book if you want to be entertained, educated, enlightened, and most of all taught how to step out of the crowd to become your own true & authentic self” - Marc Benioff, New York Times bestselling author of Trailblazer