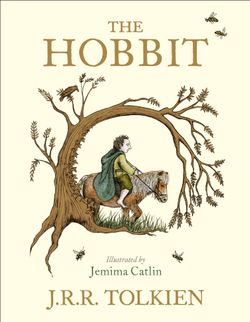 The Hobbit by J. R. R. Tolkien is a timeless classic. The unforgettable story of Bilbo, a peace-loving hobbit who embarks on a strange and magical adventure, is brought to life by Jemima Catlin’s charming and lively colour illustrations in a way that will entice and entertain a new generation of readers.

Bilbo Baggins enjoys a quiet and contented life, with no desire to travel far from the comforts of home; then one day the wizard Gandalf and a band of dwarves arrive unexpectedly and enlist his services – as a burglar – on a dangerous expedition to raid the treasure-hoard of Smaug the dragon. Bilbo’s life is never to be the same again.

Seldom has any book been so widely read and loved as J. R.R. Tolkien’s classic tale, ‘The Hobbit’. Since its first publication in 1937 it has remained in print to delight each new generation of readers all over the world, and its hero, Bilbo Baggins, has taken his place among the ranks of the immortals of fiction.

J. R. R. Tolkien (1892-1973) was a distinguished academic, though he is best known for writing The Hobbit, The Lord of the Rings and The Silmarillion, plus other stories and essays. His books have been translated into over 50 languages and have sold many millions of copies worldwide.Jemima Catlin (born in 1986) grew up in Dorset and developed a passion for drawing at an early age. She graduated from the Arts University College at Bournemouth with a Foundation Degree in Visual Communication and then went on to complete a BA Honours Degree in Illustration in 2010.After leaving university she became a freelance illustrator, working on some personal projects and undertaking several commissions before embarking on the exciting journey of illustrating The Hobbit.