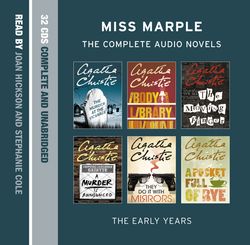 Six complete and unabridged Agatha Christie novels read by Joan Hickson and Stephanie Cole, perfect whether you’ve been a fan of Miss Marple for years or are just starting to discover her now for the first time.

The Murder at the Vicarage – read by Joan Hickson
It was a careless remark for a man of the cloth. And one which was to come back and haunt the clergyman just a few hours later. From seven potential murderers, Miss Marple must seek out the suspect who has both motive and opportunity.

The Body in the Library – read by Stephanie Cole
It’s seven in the morning. The Bantrys wake to find the body of a young woman in their library. She is wearing evening dress and heavy make-up, which is now smeared across her cheeks. The respectable Bantrys invite Miss Marple to solve the mystery… before tongues start to wag.

The Moving Finger – read by Joan Hickson
Lymstock is a town with more than its share of shameful secrets – a town where even a sudden outbreak of anonymous hate-mail causes only a minor stir. But all that changes when one of the recipients, Mrs Symmington, commits suicide. Her final note said ‘I can’t go on’.

A Murder is Announced – read by Joan Hickson
The villagers of Chipping Cleghorn, including Miss Marple, are agog with curiosity over an advertisement in the local gazette which reads: ‘A murder is announced and will take place on Friday October 29th, at Little Paddocks at 6.30 p.m.’ Unable to resist the mysterious invitation, a crowd begins to gather at the appointed time when, without warning, the lights go out…

They Do It With Mirrors – read by Joan Hickson
Miss Marple senses danger when she visits a friend living in a Victorian mansion which doubles as a rehabilitiation centre for delinquents. Her fears are confirmed when a youth fires a revolver at the administrator, Lewis Serrocold. Neither is injured. But a mysterious visitor, Mr Gilbrandsen, is less fortunate…

A Pocket Full of Rye – read by Joan Hickson
Sipping tea in his ‘counting house’ Rex Fortescue suffers an agonising and sudden death. On later inspection, the pockets of the deceased were found to contain traces of cereals. Yet, it was the incident in the parlour which confirmed Miss Marple’s suspicion that here she was looking at a case of crime by rhyme…

Agatha Christie was born in Torquay in 1890 and became, quite simply, the best-selling novelist in history. Her first novel, The Mysterious Affair at Styles, written towards the end of the First World War, introduced us to Hercule Poirot, who was to become the most popular detective in crime fiction since Sherlock Holmes. She is known throughout the world as the Queen of Crime. Her books have sold over a billion copies in the English language and another billion in 100 foreign languages. She is the author of 80 crime novels and short story collections, 20 plays, and six novels under the name of Mary Westmacott.