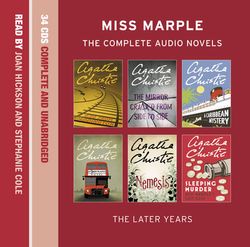 Six complete and unabridged Agatha Christie novels read by Joan Hickson and Stephanie Cole, perfect whether you’ve been a fan of Miss Marple for years or are just starting to discover her now for the first time.

4:50 from Paddington – read by Joan Hickson
For an instant the two trains ran together, side by side. In that frozen moment, Elspeth witnessed a murder. Helplessly, she stared out of her carriage window as a man remorselessly tightened his grip around a woman’s throat. The body crumpled. Then the other train drew away. But who, apart from Miss Marple, would take her story seriously?

The Mirror Crack’d from Side to Side – read by Joan Hickson
One minute, silly Heather Badcock had been gabbling on at her movie idol, the glamorous Marina Gregg. The next, Heather suffered a massive seizure. But for whom was the deadly poison really intended?

A Caribbean Mystery – read by Joan Hickson
As Miss Marple sat basking in the Caribbean sunshine she felt mildly discontented with life. True, the warmth eased her rheumatism, but here in paradise nothing ever happened. Eventually, her interest was aroused by an old soldier’s yarn about a strange coincidence. Infuriatingly, just as he was about to show her an astonishing photograph, the Major’s attention wandered. He never did finished the story…

At Bertram’s Hotel – read by Stephanie Cole
When Miss Marple comes up from the country for a holiday in London, she finds what she’s looking for at Bertram’s Hotel: traditional decor, impeccable service and an unmistakable atmosphere of danger behind the highly polished veneer.

Nemesis – read by Joan Hickson
In utter disbelief Miss Marple read the letter addressed to her from the recently deceased Mr Rafiel – an acquaintance she had met briefly on her travels. Recognising in Miss Marple a natural flair for justice, Mr Rafiel had left instructions for her to investigate a crime after his death. The only problem was, he had failed to tell her who was involved or where and when the crime had been committed.

Sleeping Murder – read by Stephanie Cole
Soon after Gwenda moved into her new home, odd things started to happen. Despite her best efforts to modernise the house, she only succeeded in dredging up its past. Worse, she felt an irrational sense of terror every time she climbed the stairs…

Agatha Christie was born in Torquay in 1890 and became, quite simply, the best-selling novelist in history. Her first novel, The Mysterious Affair at Styles, written towards the end of the First World War, introduced us to Hercule Poirot, who was to become the most popular detective in crime fiction since Sherlock Holmes. She is known throughout the world as the Queen of Crime. Her books have sold over a billion copies in the English language and another billion in 100 foreign languages. She is the author of 80 crime novels and short story collections, 20 plays, and six novels under the name of Mary Westmacott.