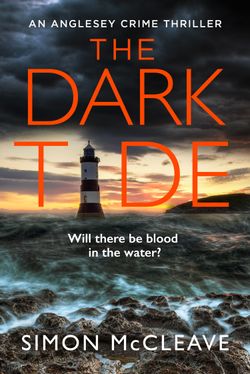 Bestselling phenomenon Simon McCleave is back with a gripping, atmospheric new crime thriller series set on the Isle of Anglesey.

Will there be blood in the water?

Three years ago, DCI Laura Hart was the top Hostage and Crisis Negotiator for the Greater Manchester Police. Then her husband was kidnapped. Despite her best efforts to reason with the criminals, he was brutally murdered.

Now living on the Isle of Anglesey in Wales, Laura is slowly healing. Then she gets a call: armed drug dealers have seized a tourist boat – and her ten-year-old son Jake is on board. There’s no other negotiator available, and the police need her to step up.

With the life of a loved one yet again on the line and memories of the last time she failed still searingly fresh, Laura is living her worst nightmare. Can she lay to rest the ghosts of her past in time to save her son?

‘The fact that I’ve already pre-ordered the next book in this series says it all really.’ ⭐⭐⭐⭐⭐

‘If you’ve never read Simon’s books, take the chance and find yourself a new go-to writer.’ ⭐⭐⭐⭐⭐

‘Good action with unpredictable twists and turns to keep you from putting down the book.’ ⭐⭐⭐⭐⭐

Simon McCleave is a bestselling crime novelist. His first book, The Snowdonia Killings, was released in January 2020 and soon became an Amazon bestseller, reaching No. 1 in the Amazon UK Chart and selling over 150,000 copies.Before he became an author, Simon was a script editor at the BBC and a producer at Channel 4, before working as a Story Analyst in Los Angeles. Throughout his career he has worked on films such as The Full Monty and television series such as Silent Witness, Murder In Suburbia, Teachers, The Bill, Eastenders and many more. His Channel 4 film 'Out of the Game' was critically acclaimed and described as 'an unflinching portrayal of male friendship' by Time Out.Simon lives in North Wales with his wife and two children.