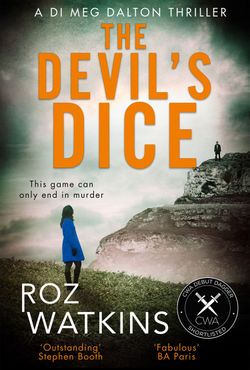 The Times Crime Book of the Month, April 2018

‘A fascinating debut’ The Sunday Times

‘A touch of Agatha Christie, a dash of Ann Cleeves’s Vera and a suitably moody setting in the Peaks…bring a formidable newcomer to British crime writing.’ Daily Mail

A lawyer is found dead in a Peak District cave, his face ribboned with scratches.

Amidst rumours of a local curse, DI Meg Dalton is convinced this is cold-blooded murder. There’s just one catch – chiselled into the cave wall above the body is an image of the grim reaper and the dead man’s initials, and it’s been there for over a century.

As Meg battles to solve the increasingly disturbing case, it’s clear someone knows her secrets. The murderer is playing games with Meg – and the dice are loaded…

Roz Watkins is the author of the DI Meg Dalton crime series, which is set in the Peak District where Roz lives with her partner and a menagerie of demanding animals.Her first book, The Devil’s Dice, was shortlisted for the CWA Debut Dagger Award, and has been optioned for TV.Roz studied engineering at Cambridge University before training in patent law. She was a partner in a firm of patent attorneys in Derby, but this has absolutely nothing to do with there being a dead one in her first novel.In her spare time, Roz likes to walk in the Peak District, scouting out murder locations.