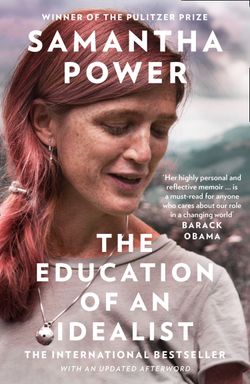 THE INTERNATIONAL BESTSELLER NAMED ONE OF THE BEST BOOKS OF THE YEAR BY:
The New York Times • Time • The Economist • The Washington Post • Vanity Fair • Times Literary Supplement

‘What can one person do?’ In this vibrant, galvanizing memoir, human rights advocate and Pulitzer-Prize winning writer Samantha Power offers an urgent response to this question.

As she traces her path from Irish immigrant to war correspondent and activist to eventually becoming the youngest-ever US Ambassador to the United Nations, Power writes with a unique blend of suspenseful storytelling, vivid character portraits and disarming honesty.

Her account illuminates the challenges of navigating the halls of power while trying to put one’s ideals into practice (and raise two young children along the way), and it shows how – even in the face of daunting challenges – each of us can make a difference.

Samantha Power is a leading global voice on human rights and international affairs. She served for four years as President Barack Obama’s human rights adviser and then, from 2013 to 2017, in his Cabinet and as US Ambassador to the United Nations. Power is the author of several books, including the Pulitzer Prize-winning ‘A Problem From Hell’: America and the Age of Genocide, and has been named one of TIME’s ‘100 Most Influential People’ and one of Forbes’ ‘100 Most Powerful Women’. Currently a professor of practice at Harvard Law School and Harvard Kennedy School, she lives in Massachusetts with her husband, Cass Sunstein, and their two children. Power immigrated to the United States from Ireland at the age of nine.