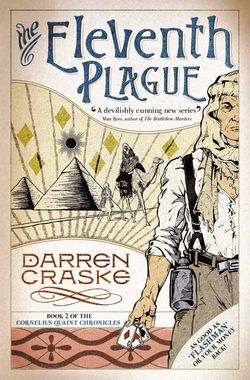 The new Cornelius Quaint adventure. The thrilling sequel to The Equivoque Principle.

Picking up where The Equivoque Principle left off, The Eleventh Plague sees Cornelius Quaint embark on his most perilous adventure yet.

Bidding an emotional farewell to Dr Marvello’s Travelling Circus, Quaint leaves for Egypt with only fortune-teller Madame Destine by his side. Once in the land of the pyramids they must do battle with desert thieves, unearth long-buried secrets and attempt to foil the villainous Hades Consortium’s plans to poison the River Nile.

The Times called The Equivoque Principle a ‘boisterous comedy’ with ‘hairpin plot twists’ and The Eleventh Plague follows in the grand tradition of Victorian serials.

Darren Craske began his career writing comic books and lives in the south of England.