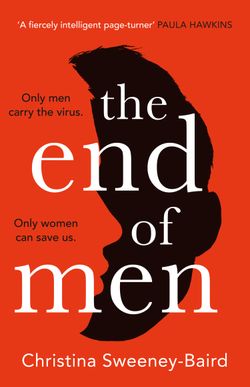 ‘THE STUFF THAT CLASSICS ARE MADE OF’ AJ FINN

Glasgow, 2025. Dr Amanda Maclean is called to treat a patient with flu-like symptoms. Within three hours he is dead. This is how it begins.

The unknown virus sweeps through the hospital with deadly speed.

The victims are all men.

Dr Maclean raises the alarm. But by the time the authorities listen to her, the virus has spread to every corner of the world. Threatening families. Governments. Countries.

Can they find a cure before it’s too late? Can they stop

THE END OF MEN?

Christina was born in 1993 and grew up between London and Glasgow. She studied Law at the University of Cambridge and graduated with a First in 2015. Christina works as a Corporate Litigation lawyer in London. The End of Men is her first novel.

Digital Assets: The End of Men by Christina Sweeney-Baird

Christina Sweeney-Baird introduces her debut novel The End of Men.