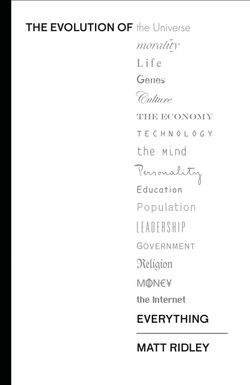 We are taught that the world is a top-down place. Acclaimed author, Matt Ridley, shows just how wrong this is in his compelling new book.

This is more often wrong than right. ‘The Evolution of Everything’ is about bottom-up order and its enemy, the top-down twitch, the endless fascination human beings have for design rather than evolution, for direction rather than emergence. Top downery is the source of most of our worst problems in the past – why Hitler won an election, why the sub-prime bubble happened, why Africa lingered in poverty when Asia did not, why the euro is a disaster – and will be the scourge of this century too.

And although we neglect, defy and ignore them, bottom-up trends still shape the world. The growth of technology, the sanitation-driven health revolution, the quadrupling of farm yields so that more land could be released for nature – these were largely emergent phenomena. So was the internet, the mobile phone revolution and the rise of Asia.

In this wide-ranging, highly opinionated non-fiction narrative, Ridley draws on anecdotes from science, economics, history, politics and philosophy and examples drawn from the scientific literature, from historical narratives and from personal anecdotes.

Matt Ridley received his BA and D. Phil at Oxford researching the evolution of behaviour. He has been science editor, Washington correspondent and American editor of The Economist. He is the author of bestselling titles The Red Queen (1993), The Origins of Virtue (1996), Genome (1999) and Nature via Nurture (2003). His books have sold over half a million copies, been translated into 25 languages and been shortlisted for six literary prizes. In 2004 he won the National Academies Book Award from the US National Academies of Science, Engineering and Medicine for Nature via Nurture. In 2007 Matt won the Davis Prize from the US History of Science Society for Francis Crick: Discoverer of the Genetic Code. He is married to the neuroscientist Professor Anya Hurlbert.