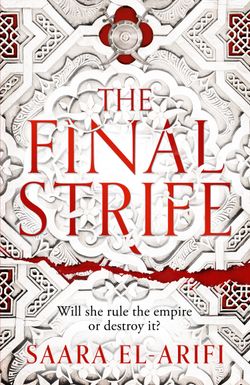 The Empire rules by blood

Red is the blood of the elite, of magic, of control.

Blue is the blood of the poor, of workers, of the resistance.

Clear is the blood of the servants, of the crushed, of the invisible.

The Aktibar – a set of trials held every ten years to find the next Ember rulers of the Empire – is about to begin.

All can join but not just anyone can win; it requires great skill and ingenuity to become the future wardens of Strength, Knowledge, Truth and Duty.

Sylah was destined to win the trials and be crowned Warden of Strength. Stolen by blue-blooded rebels she was raised with a Duster’s heart; forged as a weapon to bring down from within the red-blooded Embers’ regime of cruelty. But when her adopted family were brutally murdered those dreams of a better future turned to dust.

However, the flame of hope may yet be rekindled because Sylah wasn’t made to sparkle, she was born to burn.

And it’s up to her whether she rules the empire or destroys it.

With a DNA profile that lights up like a satellite photograph of earth, Saara El-Arifi's heritage is intrinsically linked to the themes she explores in her writing.She was raised in the Middle East until her formative years, when her family swapped the Abu Dhabi desert for the English Peak District hills. This change of climate had a significant impact on her growth—not physically, she’s nearly 6ft—and she learned what it was to be Black in a white world.El-Arifi knew she was a storyteller from the moment she told her first lie. Though her stories have developed beyond the ramblings of a child, she still appreciates the thrill of a well-told tale.THE FINAL STRIFE is Saara El-Arifi's debut novel, the first part of a trilogy inspired by Ghanaian folklore and Arabian myths.