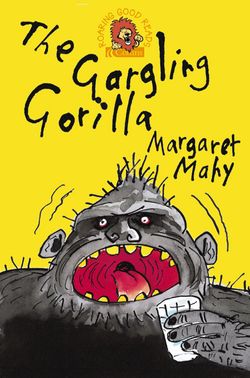 The Gargling Gorilla, The Runaway Reptiles and The Dog Magician – three hilarious stories in one volume from an award-winning author with a wicked sense of humour.
The Gargling Gorilla is a perfext text for confident young readers, with its accumulative storyline, use of repetition and alliteration and humour. Tim is animal-sitting for a neighbour who tells him which animal has which food and where it is kept. So, for example, ‘The cat likes cat snacks and the cat-snack pack is in the tall cupboard. The tall cupboard is beside the fridge, and the fridge is over there on the other side of the sink. However, when the vulture sees the cat being fed, he will get a little peckish. SO the vulture chunks are inside the fridge…’ etc. After a long list of instructions Tim finally hears ‘and the gorilla is in the cupboard under the sink.’ Tim is hugely inventive and manages to feed all the animals successfully without disturbing the gorilla. When the animal-owner comes home, he discovers that there is no gorilla under the sink – just a griller to toast his sarnies with.The real gorilla was out for the evening! This, and the other two stories, will have young readers chortling with laughter and Tony Ross’s illustrations enhance the text perfectly.

Margaret Mahy was born in New Zealand in 1936, the eldest of five children, with a huge extended family in the surrounding neighbourhood, and from the beginning her vivid imagination and love of storytelling sometimes confused reality and fantasy. She was a solitary little tomboy, living in her own world and talking out loud to herself. She knew she would be A Writer.

She studied philosophy at university in Auckland and Christchurch, and then qualified as a librarian, specialising in children’s reading. She brought up her two daughters alone, which at the time meant life was often tough. In 1968, an American publisher spotted one of her stories published in a journal issued to New Zealand schools. They asked for more and Margaret sent them one hundred – fifteen years of unpublished work. They were taken and she really was A Writer.

Since then, Margaret has published well over a hundred titles and won several major prizes and awards including the highest honour New Zealand offers, The Order of New Zealand, limited to 20 living people, for her internationally-acclaimed contribution to children’s literature. Besides this, she has twice won the prestigious Carnegie Medal, (‘The Haunting’, 1982, and ‘The Changeover’ 1984) In the States too, her books are rapturously received, several having been chosen as ALA Notables and Best Books of the Year. Margaret Mahy ‘s books are translated into more than fifteen languages.

Margaret says, ‘It is in the nature of books, that they have the capacity to make you feel powerful about what you can alter and achieve in your life’

Margaret now lives in a house overlooking Governors Bay in the South Island of New Zealand, which she partly built herself and regularly travels to Europe to promote her books and talk at conferences.