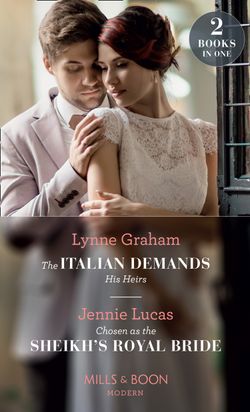 The Italian Demands His Heirs

A night in the Italian’s bed…

To counter a media scandal, Raffaele must marry Vivi. And he’s not above using seduction to convince her! But when Vivi discovers she’s pregnant, Rafaelle demands she meet him down the aisle—for real!

Chosen as the Sheikh’s Royal Bride

Swept into the royal bedchamber!

Beth can hardly believe Sheikh Omar would even notice her. So, when she’s chosen as his bride, she’s stunned. Thrown into a world of unimagined luxury, can this shy Cinderella ever be a queen…?

Jennie Lucas's parents owned a bookstore and she grew up surrounded by books, dreaming about faraway lands. At twenty-two she met her future husband and after their marriage, she graduated from university with a degree in English. She started writing books a year later. Jennie won the Romance Writers of America’s Golden Heart contest in 2005 and hasn’t looked back since. Visit Jennie’s website at: www.jennielucas.com