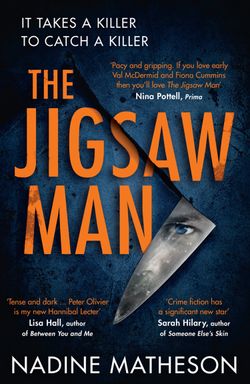 There’s a serial killer on the loose.

The race is on before more bodies are found.

But will it take a killer to catch the killer?

When body parts start washing up along the banks of the river Thames, the Serial Crimes Unit is called to investigate, and it quickly becomes apparent to DI Henley that there isn’t just one victim. There are two.

The murders are hauntingly familiar to Henley. The modus operandi matches that of Peter Olivier, the notorious Jigsaw Killer. But Olivier is already behind bars, and Henley was the one who put him there.

Olivier is the last person Henley wants to see but she needs his help. He might be their best chance to stop the copycat before more body parts start turning up. But when Olivier learns of the new murders, helping out Henley and the SCU is the last thing on his mind.

All bets are off and the race is on to catch the killer before the body count rises. But who will get there first – Henley or the Jigsaw Killer?

Nadine Matheson was born and raised in Deptford (one of the murders in The Jigsaw Man takes place five minutes from her front door) and is a criminal solicitor. Nadine is also a winner of the City University Crime Writing competition and you can follow her on Twitter @nadinematheson. The Jigsaw Man is her debut novel.