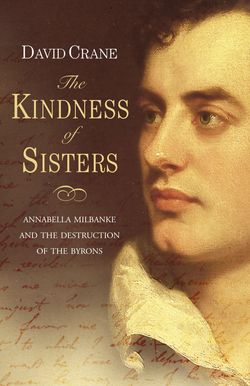 A groundbreaking work of Romantic biography; David Crane’s book is an astonishingly original examination of Byron, and a radical approach to biography.

Crane focuses on the lifelong feud between Augusta – Byron’s half-sister with whom he had a passionate affair – and Annabella, his society wife. Recreating a meeting between the two, years after Byron’s death – the Romantic ‘High Noon’ – he explores the emotional and sexual truth and the human vulnerability that lie at the heart of the Byron story.

‘The Kindness of Sisters’ is not only rigorous in its scholarship, but also superbly compelling drama. Crane’s book combines passion, revenge and recrimination in 19th-century Britain with all the intensity of a Greek tragedy.

David Crane's first book, ‘Lord Byron’s Jackal’ was published to great acclaim in 1998, and his second, ‘The Kindness of Sisters’ published in 2002, is a groundbreaking work of romantic biography. In 2005 the highly acclaimed 'Scott of the Antarctic' was published, followed by ‘Men of War’, a collection of 19th Century naval biographies, in 2009. His ‘Empires of the Dead’ was shortlisted for the 2013 Samuel Johnson Prize. He lives in north-west Scotland.