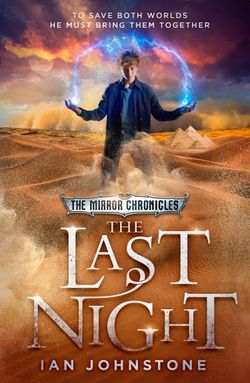 This epic finale to the thrilling Mirror Chronicles trilogy sees our heroes undertake the perilous journey to Old Kemet, the place that first broke the worlds in two . . .

“It will come in a final darkness, a last night, from which there will be no dawn.”

The black oozes across pavements, seeps into gutters and rivers. Darker than death, it is the first of five “Undoings” to be unleashed by Thoth in a bid to bring both worlds under his power.

If anyone can prevent his tyranny and mend what is broken, it is Sylas and his Glimmer, Naeo. Along with their friend Simia, they must journey aboard the enchanted Windrush to the Academy of Souls, where it all began. As our world falls and the last of the Suhl battle to survive, Sylas and Naeo must come to terms with each other and their power, confront the unthinkable source of the rift, and discover the truth of Quintessence, the element that binds all things.

Can Sylas and Naeo finally unify the worlds? And if they do, what will it mean for us all?

Ian Johnstone was brought up in Oxfordshire and now lives in Oxford, which might suggest a man who likes to stick to what he knows. In fact, Ian makes an awkward habit of shifting between worlds. He grew up in a quiet English town but has spent much of his life travelling and working in Africa. He has a love of science but studied English Literature. He grew up in Oxford but received his degree from Cambridge.So perhaps it’s not surprising at all that he writes fantastical novels about journeys to other worlds. Ian lives on a hill with his wife Emily and his daughter Ella.