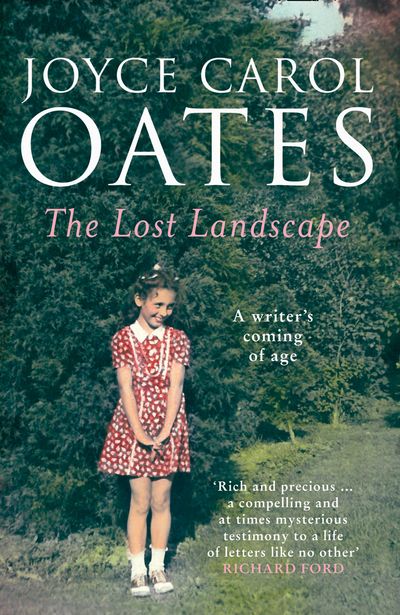 A momentous memoir of childhood and adolescence from one of our finest and most beloved writers, as we’ve never seen her before.

In The Lost Landscape, Joyce Carol Oates vividly recreates the early years of her life, powerfully evoking the romance of childhood and the way it colours everything that comes after. With memories ranging from her first friendships to her first experiences with death, this is an arresting account of the ways in which Oates’s life (and her life as a writer) was shaped by early childhood and how her later work was influenced by a hard rural upbringing.

Oates renders her memories and emotions with exquisite precision and transports the reader to a bygone place and time – the lost landscape of the writer’s past but also the lost landscapes of our own earliest, and most essential, lives.

Author: Joyce Carol Oates
Format: Paperback
Release Date: 22 Sep 2016, 13 Sep 2016 (Export Date)
Pages: 368
ISBN: 978-0-00-814661-0
Price: £9.99, €10.43
Joyce Carol Oates is a recipient of the National Book Critics Circle Ivan Sandrof Lifetime Achievement Award, the National Book Award, and the PEN/Malamud Award for Excellence in Short Fiction, and has been nominated for the Pulitzer Prize. Her books include We Were the Mulvaneys; Blonde, which was nominated for the National Book Award; and the New York Times bestseller The Falls, which won the 2005 Prix Femina. She is the Roger S. Berlind Distinguished Professor of the Humanities at Princeton University and has been a member of the American Academy of Arts and Letters since 1978. In 2003 she received the Commonwealth Award for Distinguished Service in Literature, and in 2006 she received the Chicago Tribune Lifetime Achievement Award. Her recent work of non-fiction on grief and bereavement, A Widow’s Story was a critically-acclaimed success.

”'Every piece merits re-issue … here and there we glimpse the gothic seam Oates has since mined in her fiction” - Suzi Feay, Financial Times

”'The spareness of the prose belies a hinterland of suffering . . Steely, lean and bleakly allusive, The Lost Landscape gives an unsettling insight into the ways in which Oates’s writing career has emerged” - Times Literary Supplement

”'Oates is a writer of extraordinary strengths. Her great subject, naturally, is love” - Guardian

'Oates is an inspired writer, and a formidable psychologist. She has a thrilling way of grasping an emotion, wasting no time and launching herself straight at the aching heart of the matter' Independent -