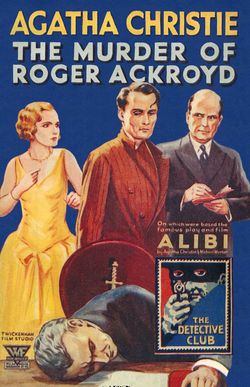 Agatha Christie’s most audacious crime mystery, reissued to mark 90 years since it was first published with a facsimile cover from 1931.

Roger Ackroyd knew too much. He knew the woman he loved had poisoned her first husband, that someone was blackmailing her, and that as a consequence she had just taken her own life. But as he read the letter that would tell him the identity of her mysterious blackmailer, he was stabbed to death in a locked room . . .

The Murder of Roger Ackroyd is one of Agatha Christie’s most brilliant detective novels and the book that catapulted her to worldwide renown. As a play, under the title of Alibi, it then enjoyed a long and successful run with Charles Laughton as Hercule Poirot. First published in May 1926 by Collins, and joining their Detective Story Club imprint in August 1931 to tie in with the release of the film version starring Austin Trevor as Poirot, The Murder of Roger Ackroyd remains as powerful and shocking today as when it was first published 90 years ago.