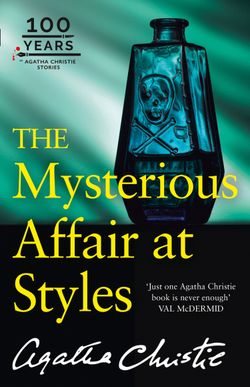 Marking exactly 100 years since the publication of Agatha Christie’s first novel, this new edition includes a previously deleted chapter and a newly discovered essay, ‘Drugs and Detective Stories’, in which Agatha Christie reminisces about the inspiration for Poirot’s first case.

Captain Arthur Hastings is invited to the rolling country estate of Styles to recuperate from injuries sustained at the Front. It is the last place he expects to encounter murder. Fortunately he knows a former detective, a Belgian refugee, who has grown bored of retirement…

‘Agatha Christie is the gateway drug to crime fiction thanks to her storytelling skills. Just one book is never enough…’ VAL McDERMID

‘What a writer. A hundred years after her first novel, and we are all still standing in her shadow.’ ANDREW TAYLOR

‘Agatha Christie must surely be the most imitated author in the entire canon of literature – what greater acclaim could there be?’ PETER JAMES