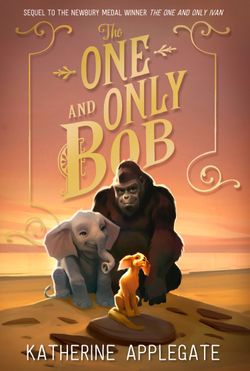 The One and Only Ivan is now a major motion picture available on Disney+!

Return to the unforgettable world of the Newbery Medal-winning and #1 New York Times bestselling novel The One and Only Ivan in this incredible sequel, starring Ivan’s friend Bob!

Bob sets out on a dangerous journey in search of his long-lost sister with the help of his two best friends, Ivan and Ruby. As a hurricane approaches and time is running out, Bob finds courage he never knew he had and learns the true meaning of friendship and family.

Bob, Ivan and Ruby have touched the hearts of millions of readers, and their story isn’t over yet. Catch up with these beloved friends before the star-studded film adaptation of The One and Only Ivan hits cinemas in August 2020!

Katherine Applegate's many books include the Roscoe Riley Rules chapter book series, the picture book The Buffalo Storm, and the award-winning novel Home of the Brave. With her husband, Michael Grant, she wrote the hugely popular series Animorphs, which has sold more than 35 million copies worldwide.Katherine was inspired to write The One and Only Ivan after reading about the true story of a captive gorilla known as Ivan, the Shopping Mall Gorilla. The real Ivan lived alone in a tiny cage for twenty-seven years at a shopping mall before being moved to Zoo Atlanta after a public outcry. He was a beloved celebrity at the zoo, which houses the nation's largest collection of western lowland gorillas. Ivan was well known for his paintings, which he "signed" with a thumbprint.Katherine lives in California with her husband and two children.

Book Trailer – The One and Only Bob by Katherine Applegate