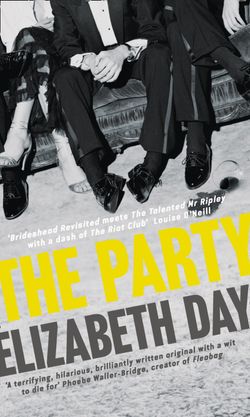 A gripping story of betrayal, privilege and hypocrisy, set in the unassailable heart of the British establishment.

‘Think Brideshead Revisited meets The Talented Mr Ripley with a dash of The Riot Club. I couldn’t put it down’ Louise O’Neill, author of Asking For It

‘As the train pressed on, I realised that my life was in the process of taking a different direction, plotted according to a new constellation. Because, although I didn’t know it yet, I was about to meet Ben and nothing would ever be the same again.’

Martin Gilmour is an outsider. When he wins a scholarship to Burtonbury School, he doesn’t wear the right clothes or speak with the right kind of accent. But then he meets the dazzling, popular and wealthy Ben Fitzmaurice, and gains admission to an exclusive world. Soon Martin is enjoying tennis parties and Easter egg hunts at the Fitzmaurice family’s estate, as Ben becomes the brother he never had.

But Martin has a secret. He knows something about Ben, something he will never tell. It is a secret that will bind the two of them together for the best part of 25 years.

At Ben’s 40th birthday party, the great and the good of British society are gathering to celebrate in a haze of champagne, drugs and glamour. Amid the hundreds of guests – the politicians, the celebrities, the old-money and newly rich – Martin once again feels that disturbing pang of not-quite belonging. His wife, Lucy, has her reservations too. There is disquiet in the air. But Ben wouldn’t do anything to damage their friendship.

‘The twists and turns that the novel takes are never predictable and the novel becomes as unsettling as it is involving. One of those books that a person reads in one day because you absolutely have to know how it turns out’ John Boyne, author of The Boy in the Striped Pyjamas

Elizabeth Day is the author of three previous novels. Her acclaimed debut Scissors, Paper, Stone, won a Betty Trask Award and Home Fires was an Observer book of the year. Her third, Paradise City, was named one of the best novels of 2015 in the Evening Standard. She is also an award-winning journalist and has written extensively for the Telegraph, The Times, the Guardian, the Observer, the Mail on Sunday, Vogue, Harper's Bazaar and Elle.@elizabdaywww.elizabethdayonline.co.uk