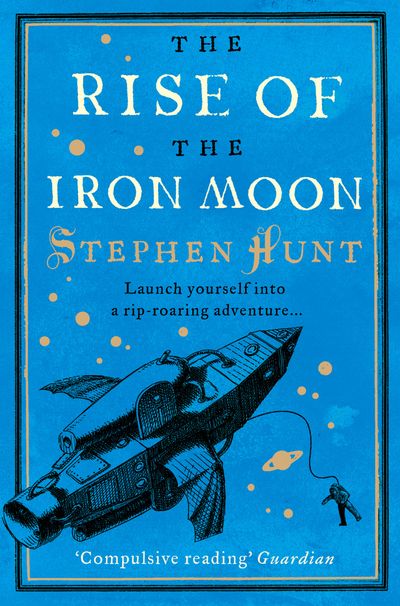 The Rise of the Iron Moon

From the author of The Court of the Air and The Kingdom Beyond the Waves comes a thrilling new adventure set in the same Victorian-style world. Perfect for fans of Philip Pullman and Susanna Clarke.

Born into captivity as a product of the Royal Breeding House, friendless orphan Purity Drake suddenly finds herself on the run with a foreign vagrant after accidentally killing one of her guards.

Her strange rescuer claims he is on the run himself from terrible forces who mean to enslave the Kingdom of Jackals as they conquered his own nation. Purity doubts his story, until reports begin to filter through from Jackals’ neighbours of the terrible Army of Shadows, marching across the continent and sweeping all before them.

But there’s more to Purity than meets the eye. As Jackals girds itself for war against an army of near-unkillable beasts serving an ancient evil with a terrible secret, it soon becomes clear that their only hope is a strange little royalist girl and the last, desperate plan of an escaped slave.

Author: Stephen Hunt
Format: Paperback
Release Date: 03 Sep 2009
Pages: 464
ISBN: 978-0-00-723223-9
Price: £10.99 (Export Price) , £10.99
Stephen Hunt has worked as a writer, editor and publisher for a number of magazines and national newspaper groups in the UK, and is currently employed on an artificial intelligence project. He is also the founder of www.SFcrowsnest.com, one of the oldest and most popular fan-run science fiction and fantasy websites, with nearly three quarters of a million readers each month. Born in Canada, the author presently lives in London, as well as spending part of the year with his family in Spain

Praise for THE RISE OF THE IRON MOON: -

”'All manner of bizarre and fantastical extravagance.” - Daily Mail

”'Hunt’s imagination is probably visible from space. He scatters concepts that other writers would mine for a trilogy like chocolate-bar wrappers. This is Philip Pullman with a dose of benzedrine. Hold on to your hat and let yourself get carried away.” - Tom Holt, SFX

'A ripping yarn … the story pounds along … constant inventiveness keeps the reader hooked … the finale is a cracking succession of cliffhangers and surprise comebacks. Great fun' SFX -

'An inventive, ambitious work, full of wonders and marvels' Lisa Tuttle, The Times -

'The characters are convincing and colourful, but the real achievement is the setting, a hellish take on Victorian London … the depth and complexity of Hunt's vision makes it compulsive reading for all ages' Guardian -

'Like a magpie, Stephen Hunt has plucked colourful events from history and politics and used them for inspiration … Hunts tells his full-blooded tale with lip-smacking relish, revealing a vivid, often gruesome imagination … [it] brims with originality and, from the first, its chase-filled plot never lets up' Starburst -