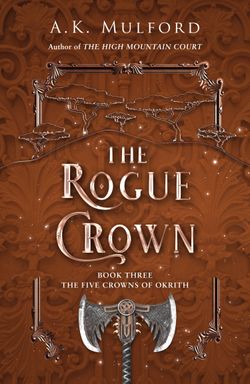 The action moves west in the third instalment of A.K. Mulford’s swashbuckling, swoonworthy epic fantasy series, the Five Crowns of Okrith, as young fae warrior Bri investigates the murder of her queen while protecting the beautiful princess she just might be falling for…

Determined to unmask the truth behind her queen’s murder, Briata Catullus sets out to defeat the witch hunters and keep her princess from their clutches. But when she arrives at the Western Court, things are even worse than she feared among the fae. She is greeted by secret plots and scheming courtiers, an inconvenient prophecy and a princess who does not wish to be saved by any one, much less Bri.

However, as the threat of the witch hunters grows, the two find they must work together if they want to survive. But Bri is determined to forge her own path and not allow for distraction – even if that distraction happens to be a princess.

A.K. Mulford is a bestselling fantasy author and former wildlife biologist who swapped rehabilitating monkeys for writing novels.She/they are inspired to create diverse stories that transport readers to new realms, making them fall in love with fantasy for the first time, or all over again.She now lives in New Zealand with her husband and two young human primates, creating loveable fantasy characters and making ridiculous TikToks (@akmulfordauthor).Visit her website at www.akmulford.com