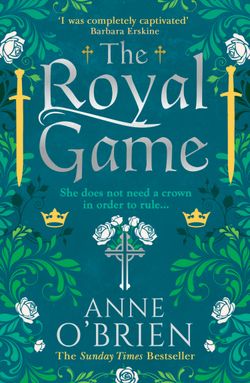 ‘I was completely captivated’ Barbara Erskine

King Henry VI’s grip on the crown hangs by a thread as the Wars of the Roses starts to tear England apart. And from the ashes of war, the House of Paston begins its rise to power.

Led by three visionary women, the Pastons are a family from humble peasant beginnings who rely upon cunning, raw ambition, and good fortune in order to survive.

Their ability to plot and scheme sees them overcome imprisonment, violence and betrayal, to eventually secure for their family a castle and a place at the heart of the Yorkist Court. But success breeds jealousy and brings them dangerous enemies…

An inspirational story of courage and resilience, The Royal Game, charts the rise of three remarkable women from obscurity to the very heart of Court politics and intrigue.

Anne O’Brien was born in the West Riding of Yorkshire. After gaining a BA Honours degree in History at Manchester University and a Master’s in Education at Hull, she lived in the East Riding for many years as a teacher of history.Today she has sold more than half a million copies of her books worldwide. She lives with her husband in an eighteenth-century timber-framed cottage in depths of the Welsh Marches in Herefordshire on the borders between England and Wales. The area provides endless inspiration for her novels about the forgotten women of history.