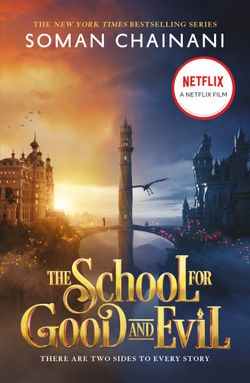 The first in the New York Times bestselling School for Good and Evil series. A dark and enchanting fantasy adventure perfect for those who prefer their fairy tales with a twist.

Two best friends have been chosen to be students at the fabled School for Good and Evil, where ordinary boys and girls are trained to be fairy-tale heroes and villains. One will train for Good, one will become Evil’s new hope. Each thinks they know where they belong, but when they are swept into the Endless Woods, they’re switched into the opposite schools. Together they’ll discover who they really are and what they are capable of. . . because the only way out of a fairy tale is to live through it.

Soman Chainani belives in fairy tales even more than the children of Gavaldon do. While studying at Harvard, he practically created his own ‘fairy tale’ major and wrote his thesis on why evil women make such irresistible fairy-tale villains.Soman is also an acclaimed screenwriter, whose films have played at more than 150 film festivals around the world, winning more than 30 jury and audience prizes.When he’s not telling stories or teaching in New York City, Soman is a die-hard tennis player who never lost a first-round match for ten years. Then he started writing The School for Good and Evil. Now he loses all the time.You can visit Soman online at www.somanchainani.net.

The School for Good and Evil: Coming to a screen near you!